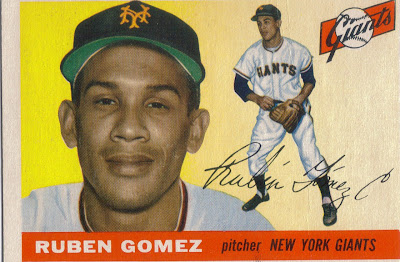 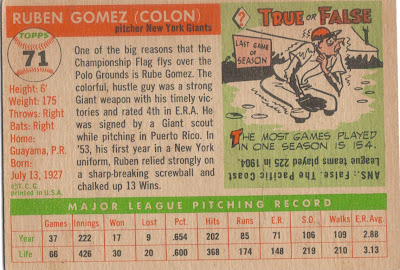 Ruben Gomez (b. 1927 - d. 2007) played in the majors from 1953 to 1960, 1962 and 1967 for the Giants, Phillies, Indians and Twins. He had a career record of 76-86, 4.09 ERA and 677 strikeouts. He was a member of the 1954 World Series Champion Giants.
.
Later in his career, Gomez played in the Mexican league. One day, a young boy begged Gomez to buy a lottery ticket that the boy was selling as a way to make money for his family. Gomez normally didn't do things like that, but the boy insisted because the number on the ticket matched Gomez's uniform number, so Gomez ended up purchasing the ticket from the boy. The lottery ticket ended up being a winner of a $35,000 prize. When Gomez tried to share the money with the boy's family, the family refused. So, Gomez went to a bank and set up a trust fund for the boy to collect when he turned 18. In 2001, when Gomez was undergoing surgery for cancer, a young mexican doctor requested to attend the surgery. After the surgery was complete, Gomez asked the young doctor why he had requested to attend, the young doctor responded that he was the young boy and that the money Gomez had left him paid for his madical school.
.
(DECEASED 40)
Posted by William Regenthal at 12:00 PM