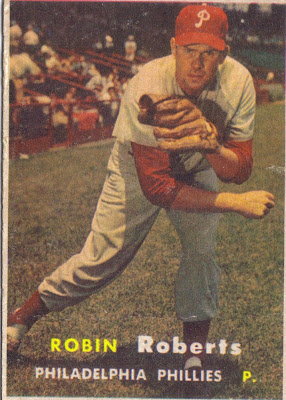 Ah, 1957 Topps. What a set! This is arguably one of the most popular sets that Topps has ever produced. With rookie card of Don Drysdale, Brooks Robinson and Frank Robinson (to name a few), this is a very high-end set. I absolutely love it. I picked up this card, along with several other '57s while at the card shop. A guy came in who wanted $20 bucks for his box of cards. He wasn't interested in making a lot of money, he was just wanting to get the shoe box out of his house. I love those days.
.
I only have 2 Robin Roberts cards so far, this one, and a 1965 Topps that my litle brother bought me one day at the shop. Roberts was a horse, pitching from 1948 to 1966 for the Phillies, Orioles, Astros and Cubs. Roberts died this year at the age of 83. His autograph is still quite affordable on ebay, some as low as $50 authenticated. I fully intend on getting an autographed baseball of Roberts very soon. Its a shame that he's gone now, I have read that he was definitely one of the 'good guys' of baseball.
Posted by William Regenthal at 9:19 PM