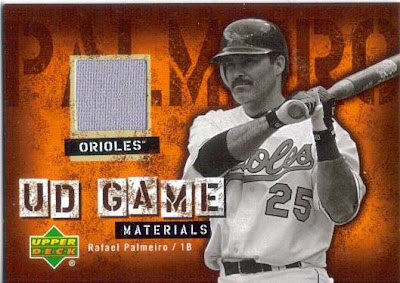 It's that time of year again, when we look at the list of newly eligible players up for election to the most prestigious hall of fame in sports, the Baseball Hall of Fame. This year will be a true indicator of exactly how the PED use of the 90's to 00's will affect future candidates. This is because former Cubs, Orioles and Rangers slugger Rafael Palmeiro is up for election for the first time.
.
On the surface, Palmeiro appears as a shoe-in. 3,000+ hits and 550+ home runs. He also had 1,835 RBIs and a .288 average. He was a model of consistency, hitting more than 37 home runs 10 times in his career. He never hit more than 47 home runs in a season and had one of the most beautiful left-handed swings that anyone has ever seen.
.
On March 17, 2005, Palmeiro wagged his finger in defiance in front of a congressional panel and stated "Let me start by telling you this - I have never used steroids. Period. I don't know how to say it any more clearly than that. Never."
.
On August 1, 2005, Palmeiro was suspended for a positive steroid test. He had appealed the positive test before finally serving his 10-game suspension on August 1. He had tested positive for the steroid Stanozolol, which is considered a major steroid.
.
Palmeiro said upon announcement of his suspension "I have never intentionally used steroids. Never. Ever. Period. Ultimately, although I never intentionally put a banned substance into my body, the independent arbitrator ruled that I had to be suspended under the terms of the program" Palmeiro later told a congressional panel that he believed the positive test result came from tainted B-12 injections from two unnamed teammates and Miguel Tejada. Congress collected B-12 samples from the 3 players and, although they did not find traces of steroids in any of the samples, they noted substantial inconsistencies between Tejada's accounts and the accounts of the other two players. Tejada said that he had gotten his B-12 shots from a supplier in the Domician Republic. He, himself would later be fingered in the Mitchell Report for steroid use and ultimately would be found guilty of perjury by lying to congress. Reportedly, all of Palmeiro's previous tests over the past two years and up to his failed 2005 test and a subsequent test just three weeks after his failed test all came up negative.
.
So, what do we know? In my mind, the failed test of 2005 is still a little murky for me to completely ban Palmeiro from the Hall of Fame. I'm not happy by his virtual silence in the years that have followed the 2005 season, but I'm not 100% sure we know all the facts surrounding his relationship with Tejada and I surely do not trust anything Tejada says. A congressional committee was unable to find enough proof to pursue perjury charges against Palmeiro, yet they were able to get a conviction on Tejada and have proceeded with cases against Barry Bonds and Roger Clemens. Many people overlook this fact when they are considering Palmeiro's worthiness for induction to the hall. He even reportedly passed a polygraph test in which he was not asked whether or not he used steroids, but he did state again that he unknowingly ingested them with a tainted B-12 shot. Palmeiro was named in the 2007 Mitchell report, but it did not identify any new information. It only rehashed Jose Canseco's allegations in his book, Palmeiro's appearance before congress and subsequent failed test. It also went into detail on a conversation between Palmeiro and former Oriole Larry Bigbie where Bigbie says that Palmeiro had asked him about his source of steroids and HGH and how the substances made him feel. Bigbie also stated that during those conversations Palmeiro denied having ever taken performance enhancing substances himself. In December 2007, Palmeiro was named by former Oriole Jason Grimsley as having used amphetamines before their ban by MLB.
.
Palmeiro had some detractors even before his failed steroid test. He never appeared in the World Series and may have been considered 'un-clutch'. yet, the numbers do speak for themselves, he is only one of four major leaguers who have hit more than 3,000 hits and more than 500 home runs. The other three? Hank Aaron, Willie Mays and Eddie Murray.
.
My opinion, not that it really matters, is that Rafael Palmeiro will eventually gain entry to the Hall of Fame. I sincerely doubt he will be elected this year, but will get in as the years go by. His numbers themselves show that he was an elite player during his time, whether he took steroids or not. It is unfortunate that the conversation is even out there as far as steroids, but when seemingly the entire league is taking them, one must feel a great amount of pressure to 'keep up.' I don't know what Palmeiro had been thinking and I don't know whether he definitively took steroids throughout his career, but the failed test is there. The fact that he passed numerous tests before and a test soon after, I don't know that I would bet my life 100% on the validity of the failure. I know that this entry will generate a lot of hard feelings and create a bit of debate, but I was and still am a fan of Rafael Palmeiro. I personally hope he gains entry to the hall. I also realize that if he is to be elected, then a player whom I really can't stand should get in as well, and that is Barry Bonds. Yes, Bonds should get in. So should Clemens. These guys were the greatest players of their generation. I believe they will be inducted, sooner or later. We shall see.
Posted by William Regenthal at 5:37 PM

I agree with you that he should get in, as well as the other steroid accused players, but an asterisk does need to be put on the plaque. Cheating the game deserves some sort of negative recognition in the Hall of Fame. Raffy was a great player, steroids or not, so it's gonna be tough but I think he'll get in eventually.

Great write up, heres how I view this - if mlb allows anyone linked to steroids in, then it opens the flood gates. More players will use them and this will be a reaccuring story and continuous black mark on baseball. If mlb and the writers punish the players then they still have some control and baseball has some integrity left.