My dad decided to go racing again this weekend, and I was able to take off from the card shop so I could help out. My wife was also afforded a rare weekend off, so we were able to make a family deal out of it. Dad decided to race both his Pro Modified (the Yellow car) and his 'Classic Gear Jammer' (a Red 1967 Corvette). Because of the task of managing both cars, I decided to help out with the Gear Jammer. 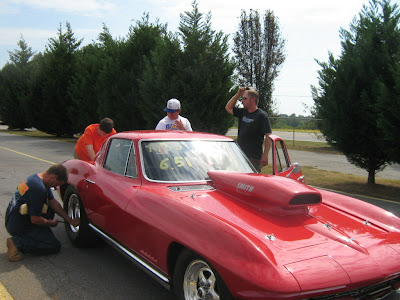 Here we are pushing Dad along the staging lanes for his practice run in the car. We have his crew man Paul checking tire pressure, my brother Andy in the orange t-shirt, me with my handy dandy Lookouts hat and my brother Kenny by the door. 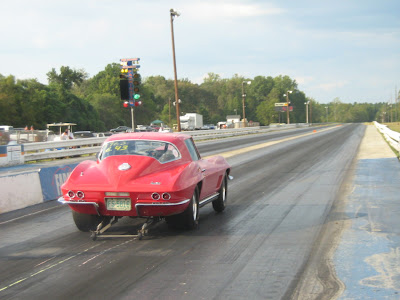 I had never seen dad race this car before, but I realized this weekend that I really enjoyed watching it. The car is LOUD and pops wheelies as it launches, which is really cool and brings back memories of how things used to be way back when. 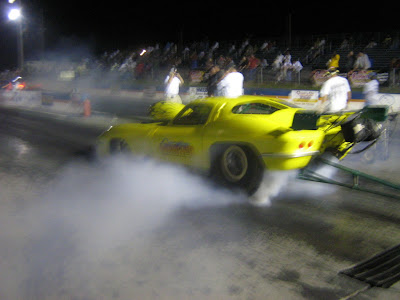 Dad lost in the second round of eliminations in the red car and made it to the semi-final round with the yellow one. Both cars ran very consistently all day long. 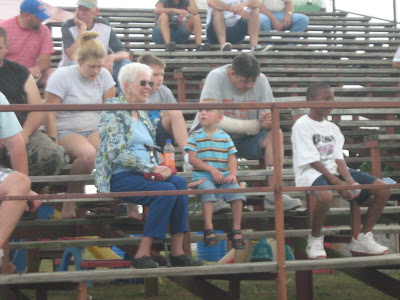 My aunt and grandma also made the trip, here is a picture of my grandma watching the action with my son, Christopher. 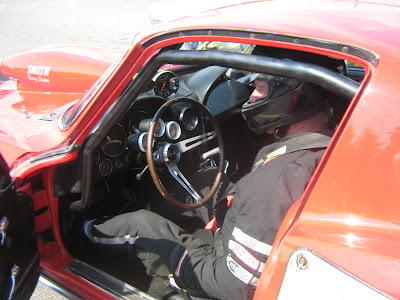 Here is a cool picture of Dad prepping for a run in the red car (I should have taken one of him in the yellow car too, but didn't think of it at the time).

I did shoot a video, however. Check it out and let me know what you think. 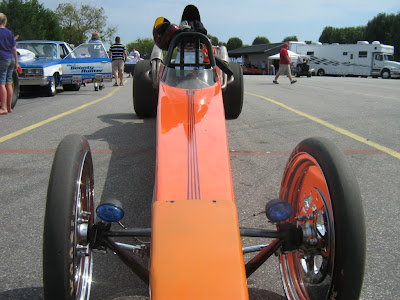 Not to be forgotten, my brother, Kenny, raced his dragster. My wife took this picture, which I thought turned out pretty well. Kenny lost in the first round, bought back in and lost in the second as well. He ran well, it just wasn't his night.
We were at Farmington Dragway for their Chick-Fil-A Family Fun Day, and one of the promotions was for a couple exhibition runs of a Top Fuel dragster. It had been 12 years since I have seen a top fueler in person. It was pretty bad ass. My wife and son had never seen one, and the look on their faces after the run was priceless.

It ended up raining once the semi-final round of Pro Modified was completed, so we didn't get to see the conclusion of the race, or another pass by the Top Fueler.

Posted by William Regenthal at 7:04 PM