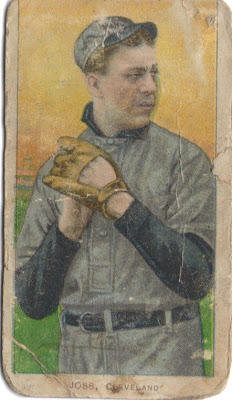 I have been watching Ken Burns' 'Baseball' lately in preparation of the upcoming release of 'Inning 10.' During my viewing of this groundbreaking documentary, I have been trying to research some of the historic players of the early days of baseball. I have been checking out ebay auctions, seeing if I can get some cards of a few of these hall of famers at a decent price.

I happened upon a T-206 Addie Joss last week and was able to win it for less than $20. Not bad. As you can see it is all effed up. The back of the card is what I had shown last week. I do intend on watching the youtube video of the glue/paper removal once I can tell that my connection is dependable. I'm still a little leery of putting a 100-year old card in boiling water. I have enough geology books here (studying for part II of the ASBOG exam) to dry the card out, but I'm still scared I'm going to mess it up (worse than it already it is).

Joss is the only Hall of Famer to have played less than 10 years. He was forced to retire at age 30 when he contracted tubercular meningitis. It was this disease that took his life a year later at age 31.

The first 'All-Star Game' was played for the benefit of Joss' family.

That is a much loved card. Very nice pickup.