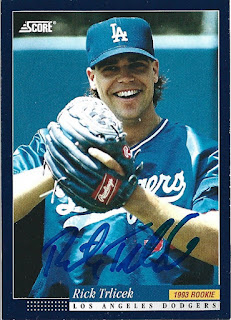 These are two cards from the 1990s that I was able to get signed TTM from Rick Trlicek.  An interesting last name made it easy to spot him in my boxes.  I was glad to move these two into the album.  I have a ton of 1994 Score, and I rarely am able to get into that box, since it is at the bottom of a large stack of 5,000-count boxes in my closet. 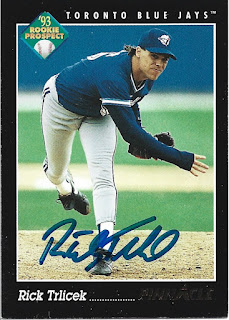 When I went to a show in Virginia last year, I picked up a box that had a bunch of 1993 Pinnacle.  I didn't have many of these at the time, so it was nice to add something different to the boxes, even though they came out of the Junk Wax Era.  Both cards turned out nicely from the TTM success.

I mailed to Trlicek on November 10 and got the cards back on December 6, for a 26-day TAT.

Posted by William Regenthal at 5:37 PM