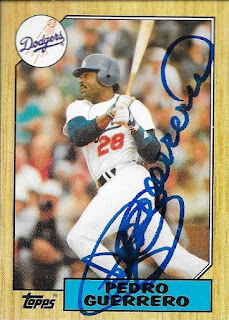 I had heard sometime last year, that Pedro Guerrero has a health scare.  So, I was surprised to see that his name popped up as part of a private signing a couple months ago.  I was also surprised to see that I had no Pedro Guerrero cards in my 5,000-count box of 1987 Topps.  So, I had to find one online and send the card that I had in my 87 set, so I could get it to the signing in time.  Also, I didn't see the signing until something like 10 days out, so I was really worried that the card wouldn't get there in time.  Luckily, it did, and I was able to replace the Guerrero for my set.  This auto looks really awesome, and I am glad I can add this to the 87 album.