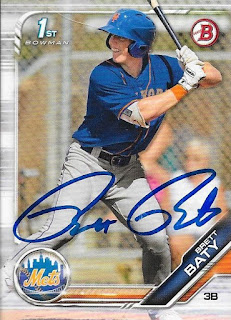 Here is another TTM success that I got by paying attention to who was signing from 2019 Bowman Draft.  I only had this Brett Baty card, so it was the only thing I sent.  It turned out great, so I was happy about that.

He reached Low A Brooklyn last season while also playing in the Gulf Coast and Appalachian Leagues.  He had 44 hits, 7 home runs and a .234 batting average.

I mailed to Baty on January 6 and got the card back on February 28, for a 53-day TAT.
Posted by William Regenthal at 8:55 PM