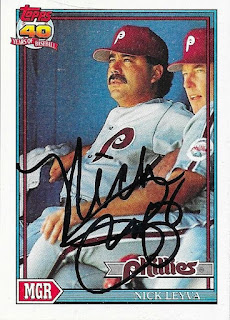 I had these Nick Leyva cards in my box for a long time, and finally got around to mailing to him.  I feel like this is a pretty common theme among my TTM requests.  I let cards sit in the boxes, with the hope that I find a few more along the way, and finally get around to dropping them in the mail.  If they're just plain old Topps base cards, they'll probably sit and wait a while.  If they're stars or really cool parallels, maybe I'll drop them in the mail sooner. 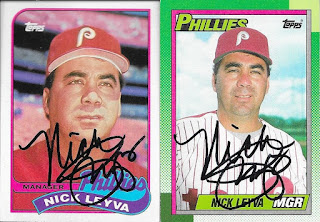 Nothing against Leyva, but his cards did sit there for a long time.  Years, probably.  I finally added them to a pile that I was sending out, and the cards came back looking great.

I mailed to Leyva on January 30 and got the cards back on February 8, for a 9-day TAT.
Posted by William Regenthal at 11:31 AM