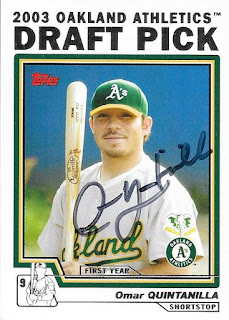 I added some cards from the 2000s to my autograph album with this TTM success from former shortstop, Omar Quintanilla.

I had gotten the 2004 Topps out of a partial set from my LCS that the guy was just going to toss in recycling.  I gave him 5 bucks for the box, and I have pulled a bunch of cards out already that I have sent or will send TTM. 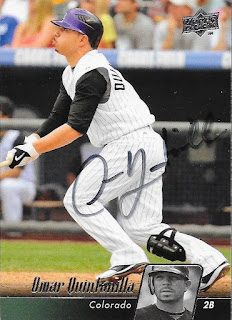 I was also glad to get this 2010 Upper Deck out of my card box and into my album.  The marker he used is on its last legs, but I'm still glad I have his autograph, nonetheless.

I mailed to Quintanilla on January 31 and got the cards back on February 22, for a 22-day TAT.
Posted by William Regenthal at 6:08 PM