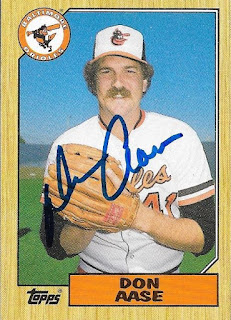 Another 1987 Topps off of the list, I was finally able to get Don Aase for my set.  I had thought he wasn't signing, but then I saw a bunch of successes pop up.  I sent the card off right when I saw the successes and got it back really quickly.

Very cool. I just sent to him earlier this week.