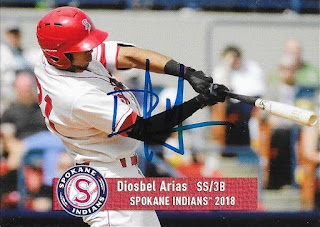 It took three seasons, but the Wood Ducks finally got an exhibition game completed against Mount Olive University.  The last two were rained out, but this one was played for 12 innings (even though the Woodies were well ahead of the Trojans after the top of the 9th was completed).  Apparently they wanted to stretch a few pitchers out. 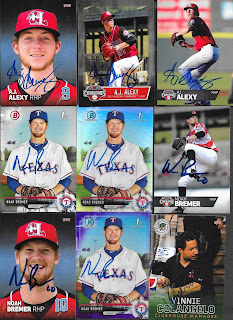 There are a lot of new faces on the team, but there are also some familiar ones this season.  I have been stockpiling Rangers prospect cards and ended up with a bunch that I can take with me to games to get signed.  I am also taking 50/50s and consignments this season, but there are a couple players I won't be taking (Leody, Anderson). 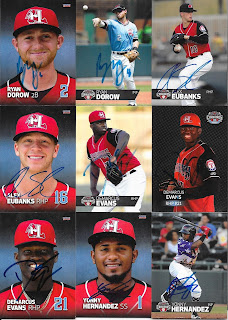 I also picked up some Hickory and Spokane team sets so I can get some of the guys who aren't in commercial products yet.  It helped out yesterday.  There are some pretty cool players who I was already able to get to sign some stuff. 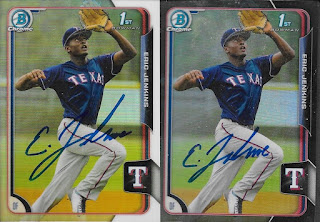 I also took care of some stuff I got at the most recent card show in Raleigh, like the two Eric Jenkins cards above.  He was really nice, once again.  I hope he has a big year this year. 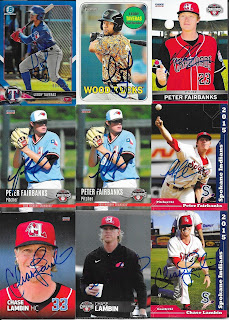 I was also able to knock out a ton of Peter Fairbanks cards that I had picked up after the "meet the team" event back in 2017.  We saw him then, but had no cards.  He then got hurt and came back last season.  He was impossible to get to sign anything last year, so I was glad I was able to get him as he came off of the field last night.  Now, I won't have to bother him again.

It was nice seeing Michael Matuella again.  I had to ask him about his Duke Blue Devils, but I did wait until he was done signing.  Everyone's bracket is busted, so it's ok. 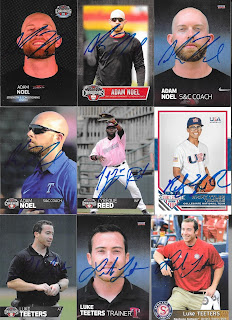 Buried in the middle of this group of cards is Tyreque Reed.  This dude is huge.  He looks like he should be playing football, but I'm glad he is a Wood Duck.  I'm looking forward to seeing him crush a few baseballs. 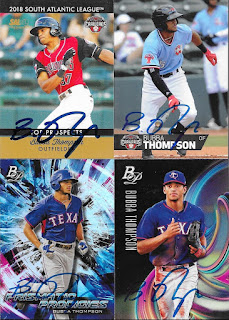 Aside from Leody and Anderson, Bubba Thompson is probably the biggest Rangers prospect on the team.  I was told ahead of time that he will sign anything you have.  That was not the case on Monday.  Maybe he will sign more later on, but yesterday, he was only two-per.  I got him twice, though, so I was able to get some cards out of the way.  I took several 50/50s on him, so I hope that he will help get them done.  We will see as the season progresses.

The biggest news of the day came when I finally broke down and purchased season tickets for my son and I.  It was only a matter of time, and I was happy to do it.  I imagine it will save me money in the long run, so that's a plus.

Now I sit and wait for the season to start on Thursday.
Posted by William Regenthal at 11:03 PM

Congrats on the season tickets! And good luck graphing!