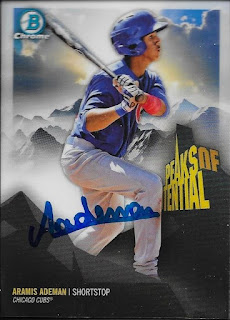 I have been super busy with this current homestand of the Wood Ducks.  I've already used a bunch of my season tickets, which is helping me justify what I spent on them.  The Woodies just wrapped up the current homestand and are hitting the road, which will give me some time to reset and relax for a bit.

I didn't have too many cards of the Pelicans, but what I did have, I got signed.  I have nothing leftover for them, which is nice.  I was able to get a few cards removed from my box and also was able to take care of a few 50/50s.

Aramis Ademan is still the toughest signature for the Pelicans, and also probably the best looking.  The above 2018 Bowman Peaks of Potential really turned out nicely. 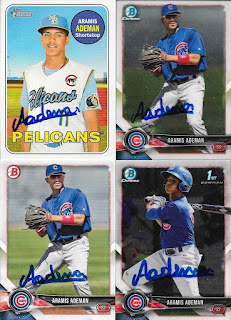 I also got Ademan on these 4 cards.  He was pretty nice, but doesn't say a whole lot.  He takes his time to sign a nice signature, which probably plays into why he only signed one-per.

We missed Grant Fennell the first game.  He came by, but said he was running late, and couldn't sign.  We weren't able to get his attention after he came off of the field that game, as well.  The second game, however, he walked right over, smiled and said hello.  I think he remembered us from the day before.  We chatted for a while, starting with how old the 2013 Perfect Game card was, and then onto the differences between being in Eugene, Oregon and Myrtle Beach, SC.  Being from San Diego, originally, Grant and I joked about how he should be getting some frequent flyer miles, but the team takes care of all of that.  He seemed like a really good kid.

I finished off what little I had left of Alex Lange on the second day.  We missed the third game, since that one was Education Day, and an 11AM game.  There was some action that day, as Lange was tossed in the bottom of the second for having  foreign substance on his arm.  The manager was then tossed, and finally the third base coach was ejected later in the third inning.  I hate that we missed an exciting game. 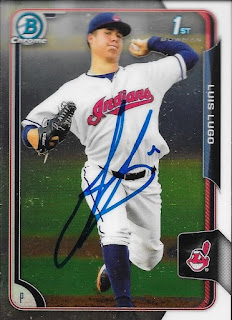 I wasn't even aware that I had any Luis Lugo cards, until I received a batch of 50/50s from Gerard.  I spent a few minutes before we left for the second game looking through the 2015 Bowmans that I had, and found this one card.  It was nice to get it out of my box, since the opportunity to get 2015 Bowmans signed is getting smaller and smaller. 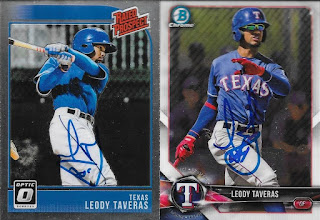 Leody is getting even tougher to graph, these days.  He has started pulling a Spike Owen and is going under the bleachers and onto the field.  I have strong feelings about that; I am thankful for all of the stuff he has signed for us, but skipping over interacting with all of the fans just isn't cool.  He can just come out onto the field like normal and tell us no, and still sign for kids.  I honestly believe he is doing this because he is upset that he is still here, instead of having been called up to AA Frisco.  It is only a matter of time before he is moved, so we shall see if his mood improves.

Bubba Thompson, still at one per, has been pretty cool.  He at least talks with us each time.  I still have maybe 7 cards left in my snap case, but I'm not sweating over getting any signed.  I have just left them out of the book, and have talked to him each time he comes by.  Currently, he is struggling with the bat, so instead of asking him to sign stuff, we just offer him encouragement, tell him to "go get em", and he has been seemingly cool. 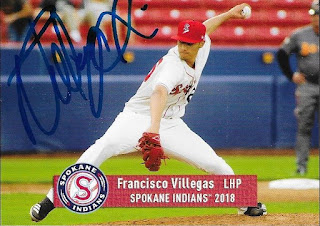 We also got some more of our Spokane stuff done.  It is always tough getting pitchers done, especially this early in the season.  I'm still learning faces, and uniform numbers. 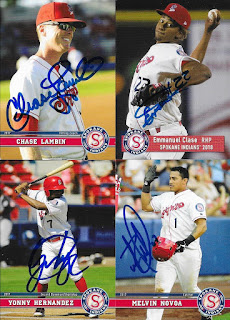 I've almost finished my Wood Ducks cards.  Aside from Bubba and Leody being one per, I have been able to get the pitchers that I have needed.

The Wood Ducks seem to be a pretty good team, so far.  The pay a lot differently under Corey Ragsdale, than they did under Spike.  I think I like this team more than the one that was here last year, but it is still early, so I am reserving judgment.  Still, I love the Wood Ducks altogether, and am so glad that I made the decision to buy the season tickets.
Posted by William Regenthal at 7:11 AM