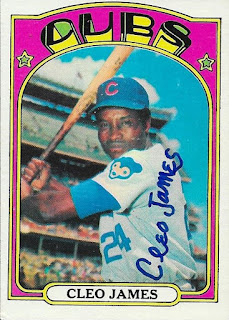 I used another of the cards that I had picked up last year from Conrad by getting this 1972 Topps signed by former Cub, Cleo James.  His signature is really clean.

I mailed to James on March 4 and got the card back on March 12, for an 8-day TAT.
Posted by William Regenthal at 7:20 AM