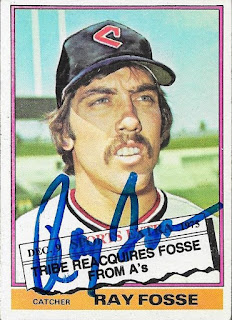 This TTM success from former catcher, Ray Fosse, was nice in that it was also a success from Spring Training.  I sent off some nice cards, and they all look great now that they are signed.  I liked this airbrushed 1976 Topps Traded showing Fosse after he had been traded back to the Indians from the A's.

Fosse was injured during a collision with Pete Rose on the last play of the 1970 All Star game.  He wound up with a later-diagnosed separated shoulder that had healed incorrectly.  That collision is still talked about today.

I mailed to Fosse on February 19, via A's Spring Training and got the cards back on March 11, for a 20-day TAT.
Posted by William Regenthal at 6:30 PM