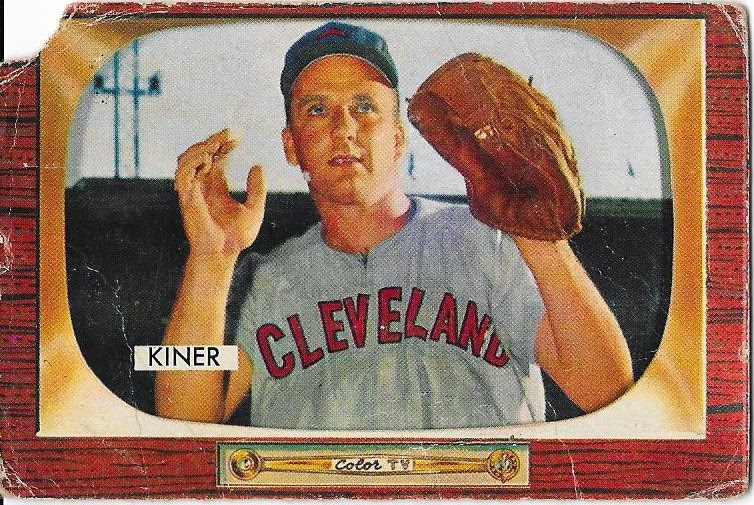 One of the things I enjoyed while I was on my vacation was that there were several card shops right near where we were staying in Michigan.  I visited two different shops (one of the shops, I visited twice) while on vacation and left them with a great many cards for my collection.

One of the shops had a box of really rough vintage cards that he hadn't gone through, yet, and I was working on a trade on Instagram for some 1954 Topps, so I offered to sort the box for the guy.  He had no problem with that, and I really enjoyed it.  I found some rough treasures, and had a good time chatting with some of the other patrons of the shop.

I found the above 1955 Bowman Ralph Kiner in the box.  It has seen better days and I almost put it back in the box, but part of me figured that no one would appreciate it the way I would, so I added it to my pile.  It pretty much became a throw-in in our overall deal, so I was glad I added it. 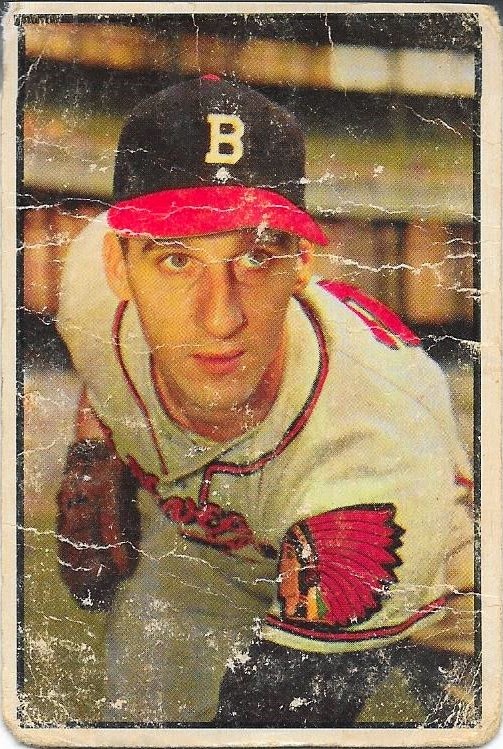 This 1953 Bowman Warren Spahn had also seen better days, but I love '53s, so I made sure to add it as well.  I have the Musial and Reese out of this set, and each card I see looks really awesome.  The 1953 set is one of the best-looking in all of the card sets out there in history, so anytime I can pick one up, I try to. 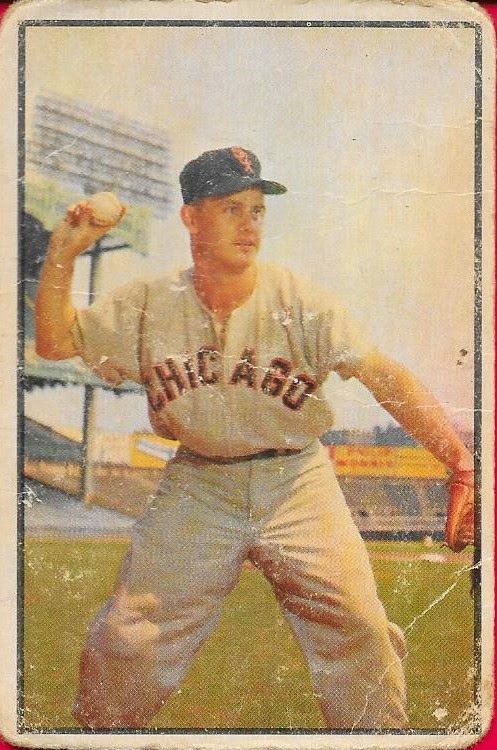 On that note, I saw this Nellie Fox 1953 Bowman and wasn't too interested, initially, but I figured that I really didn't have any of Fox's cards in my colection, and it, too, was a 1953 Bowman, so I added it to the pile as well.  Fox is one of those guys that you kind of forget is a Hall of Famer, but he is, and had passed away long before he was enshrined, so he was one of those guys who never got to enjoy being a Hall of Famer. 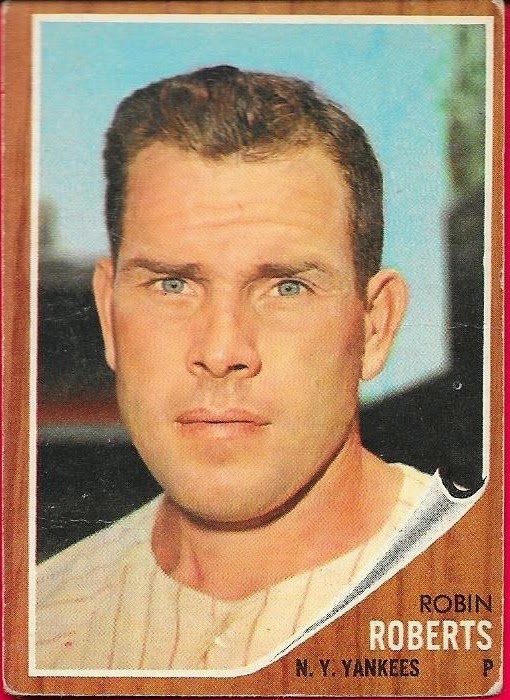 I had seen this Robin Roberts posted on other blogs before, but when I saw the opportunity to get this one for $2.50, I jumped all over it. Roberts is shown as a Yankee on this card, but he would never pitch a game for them.  He had been purchased by the Yankees from the Phillies in October of 1961, only to be released by the Yankees in May of 1962.  He was picked up by the Orioles on the same day and would have a bit of a career renaissance in Baltimore and was pivotal in adding veteran leadership to that young pitching staff.  He was released by the Orioles in July of 1965.  Had he been able to stick with the Orioles for one more year, he may have been able to collect his first World Series ring.  A World Series Championship was something that Roberts would be missing from his Hall of Fame resume. 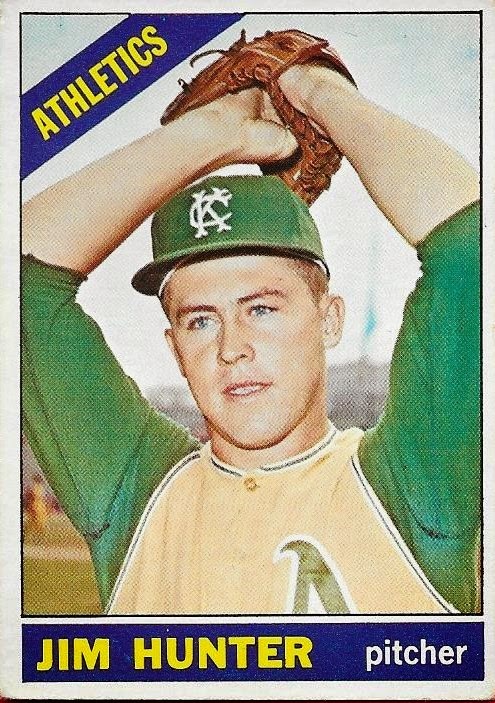 Sometimes, when I look at vintage cards, I really enjoy seeing the old, obsolete teams and their jerseys.  I picked up this 1966 Topps Catfish Hunter for a steal.  I had my choice of this or a 1967, and I chose this one.  I felt that it showed off the uniform much better.  The current A's colors are correct, but seeing the KC hat just seems odd.  This is a great shot of the future Hall of Famer, and a 2nd-year card, no less. 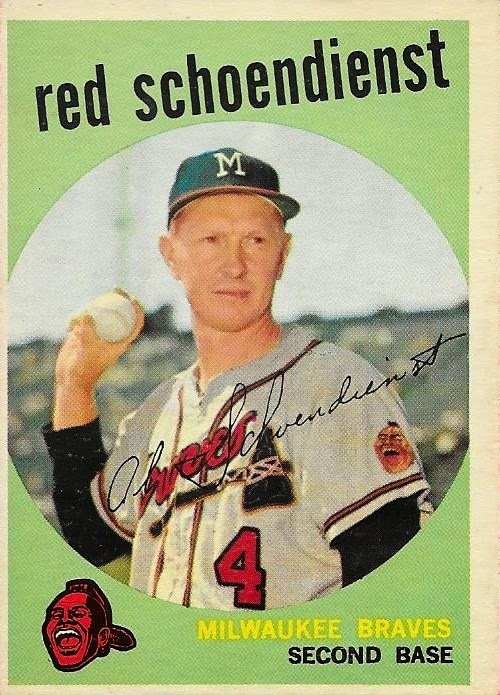 Here's another with a cool retro uniform.  I took significant chunks out of my 1959 and 1969 sets while vising the shops as well.  I forgot to count how many from each set that I purchased, but I know I had more 1959s than 1969s and I got more big name 1959s as well.  Along with Hall of Famer, Schoendienst, I got Early Wynn, Louis Aparicio AS, Nellie Fox AS and a bunch of high numbers. 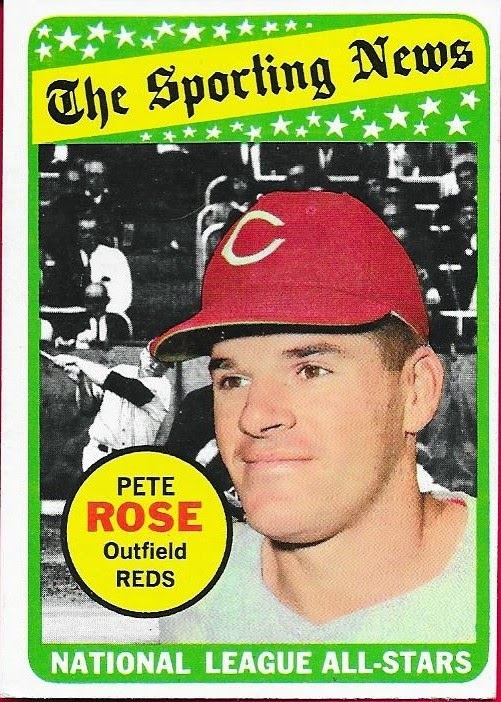 So, those are all of the cards I picked up while I was away.  I felt like I did very well.  I also did a really good job of keeping up with them as the trip went along.  I had brought along a Rubbermaid tote box and kept these with the cards I brought to show Dustin and Andrew.

Thanks for taking a look.  The next several posts will be about all of the mail I had received before I left and while I was gone.  Stay tuned, as the blog will be back of in full force again.  I hope you all missed me!
Posted by William Regenthal at 3:35 PM