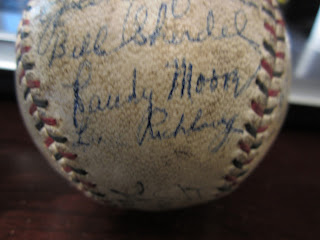 The next player I would like to show from my 1930s signed baseball is Randy Moore.  Here, you can see his signature above the previously identified Lance Richbourg on the side panel of the baseball.

He has a Hall of Fame connection in that he was traded by the Boston Braves in 1935 along with Ed Brandt to the Brooklyn Dodgers for Ray Benge, Tony Cuccinello, Bobby Reis and future Hall of Famer, Al Lopez (although, Lopez would go in as a manager).

What does Moore have in common with previously identified signers Joe Cronin and Lance Richbourg?  Moore played on the same Braves team with Richbourg in 1930 and 1931, therefore, I was able to begin to narrow down a timeframe of which teams to concentrate my roster searches and that helped me identify the rest of the signatures.  So far, Cronin has no connection to Richbourg or Moore, but as you will see in subsequent posts, I was able to check the 1930 and 1931 Senators and identify other signatures on the baseball.