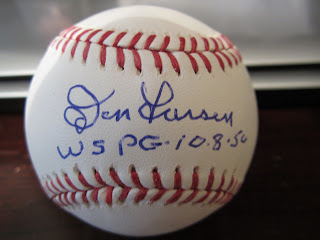 I received my 73rd TTM success this evening when I got home from work and saw a box in my mailbox.  I had sent a check to former pitcher, Don Larsen, on Saturday, May 18.  The check was for $50 which covered Larsen's fee to provide his own OMLB ball, a signature, inscription and shipping.  I didn't even have to prepare a return mailer (for once).

He had his crowning achievement as a Yankee in the 1956 World Series when he threw a perfect game against the Brooklyn Dodgers in Game 5.  The Yankees would go on to win the Series 4 games to 3 and Larsen would win the World Series MVP award.

Larsen's contributions to Yankee history don't end there.  A few years later, in 1959, Larsen would be traded with Norm Siebern, Hank Bauer and Marv Throneberry to the Kansas City A's for Joe DeMaestri, Kent Hadley and a young fellow by the name of Roger Maris.
Posted by William Regenthal at 5:49 PM