Some 2013 Emeralds From The Card Shop 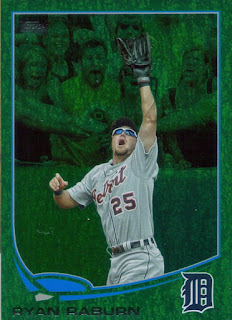 While I was looking around the card shop the other day, I found two 2013 Topps Emerald parallels that were in the bargain box.  I needed both of them, so I picked them up for my set.  I got Vance Worley and the above Ryan Raburn, leaving me with 141 total for the set out of 330.  That puts me at almost 43% completed.  These were the first two cards that I actually bought for the set.  All of the others came from packs that I busted or trades.  I think I did pretty well getting a good portion of them from trades.

Speaking of trades, I need to pick back up on that.  Hopefully, I won't have any delays in picking up any Series 2 Topps, so maybe trading will pick up for that.  I also want to get another shipment of cards ready for COMC, but the stuff I have on there has really slowed down.  You guys should check back on there and see if I have anything of interest.  The link is at the top of my page.
Posted by William Regenthal at 4:21 PM