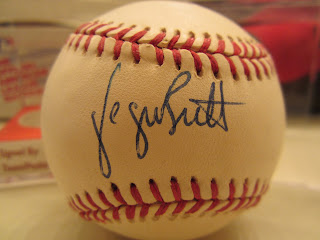 I got my 85th Hall of Fame signed baseball today while I was visiting my brother in Columbia, SC.  I went to the Columbia Antique Mall like I usually do when I'm in Columbia and I spent a good bit of money.  I spent so much time there, my brother, my wife and my son all left and came back later to pick me up.  I got a ton of 1971 Topps and another Hall of Famer, but those will be shown later.

I had been eying  this Brett ball since my last trip to the antique shop.  I got a Bill Dickey signed baseball that time, you know, I posted it here.