Another Package From Judson 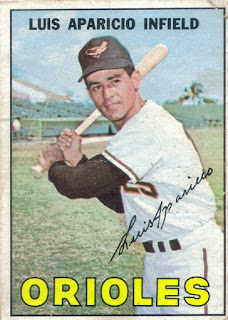 Judson from 'My Cardboard Habit' sent me another package that I got yesterday.  In the package was a bunch of Orioles cards that he thought I would like.  All of them were greatly appreciated.  I was definitely surprised when one of the cards was the above 1967 Topps Luis Aparicio.  The 1967 set isn't one of my favorites by any means, but it is still an iconic set and the more that I think about it, the more I realize that I already have a ton of good cards from the set.  I might consider putting it together in a few years, once 1959, 1969 and 1971 are finished... 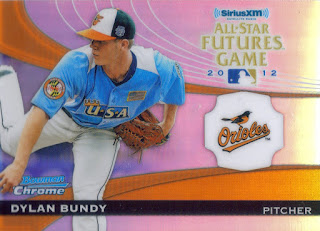 I also really liked this 2012 Bowman Chrome Futures Game Dylan Bundy.  It really is too bad that Bundy is hurt right now.  Kind of par for the course for big time pitching prospects.  I'm hoping he heals up quickly and can get back on a mound sooner rather than later.

Thanks for the package, Judson!  I will have to get some more stuff together to send your way.
Posted by William Regenthal at 5:49 PM