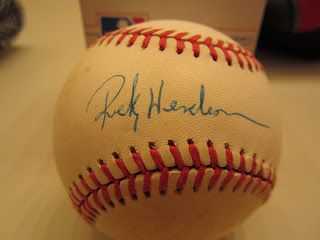 The second Hall of Fame signed baseball that I got while I was in Columbia was the above Rickey Henderson.  It is a Gene Budig OAL ball and came in the original box (really cool).

The shop owner gave me a sweet deal on the ball so I couldn't pass it up making Henderson my 86th Hall of Famer.