The Tragic Tale of Steve Bechler 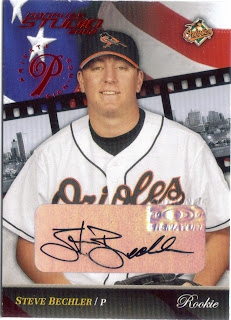 I completed a trade with Schuyler recently for the above 2002 Donruss Studio Steve Bechler Autograph.

Bechler was an Oriole prospect who will forever be a cautionary tale concerning the use of Ephedra and Ephedrine as well as the dangers of heat stroke.

Bechler was only 23 when he died of heat stroke during Spring Training in 2003.  He had been taking a dietary supplement containing Ephedra and possibly had not eaten in approximately 2 days.  He got into 3 games during the 2002 season, pitching for 4.2 innings.

Who knows how the 1998 3rd round draft pick's career would have turned out had he heeded the advice of his trainer and not taken the Ephedra, or his symptoms of heat stroke were identified sooner.

Since his death, and others linked to the drug, ephedra dietary supplements have been banned and removed from store shelves.

Thanks for the trade, Schuyler.  I wish the card had a more positive significance.  I'll post a couple more pieces from the trade later.

Check out Schuyler's blog, he does a really good job over there at Schuyler's Stuff.
Posted by William Regenthal at 6:49 PM

Thanks William! I will also try to get the other end of the trade up on my blog soon.

Nice post... it's been a while since I've heard that name.

Glad to see you and Schuyler work out a deal! That's a neat card for sure, a very interesting story.