So, I was cleaning up this weekend and looking for things to sell at a yard sale that I had yesterday when I stumbled upon this signed post card that I picked up when I visited the Hall of Fame in August. 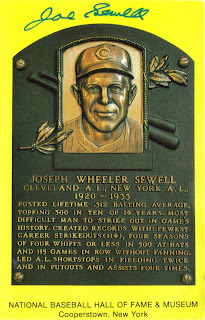 I got this Joe Sewell signed postcard from the shop where I picked up my Billy Herman and Rick Ferrell signed baseballs.  I had gone into the shop looking for a Sewell ball, but found that I could get those two (Herman and Ferrell) for the price of the one Sewell, so I went for them.

After I helped the shop owner discover that he had two awesome baseballs buried in a box of random stuff, he rewarded me by giving me this signed Sewell postcard.  I sure hope it is real, but everything else the guy had was legit and with everything he had laying around, I'm certain he had piles of signed postcards that he could part with and not even feel it.  I discussed the awesome baseballs in this post.

I have a new found respect for Joe Sewell, after researching him for this post and after picking up this awesome card.

I feel kind of bad that I promised to show off this postcard way back in August, but forgot.  It helps now, though, because I don't have much to post, so this can be something to tide you over until I get some more mail in.
Posted by William Regenthal at 7:30 PM