Trade with The Brooklyn Met 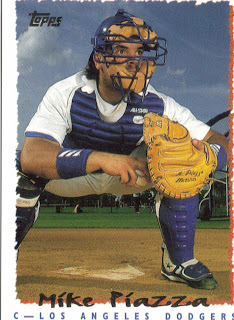 I completed a trade recently with 'The Brooklyn Met' who writes Clear Cut Cards.  I sent him some Cubs and Mets from 2011 Topps Update Series in exchange for some Orioles and a few assorted Mike Piazzas.

The above Piazza comes from 1995 Topps and is a pretty cool shot.  It looks like it came from spring training, based on the activity going on behind Piazza.  I like the clouds forming behind him. 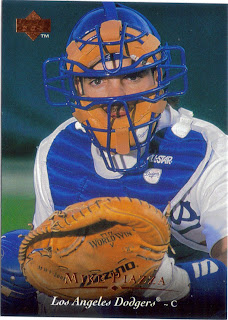 Here is a 1995 Upper Deck Piazza.  I like the shot of the catcher's mask.  I've always thought catcher's mask shots were pretty cool.  Another good one being Ramon Hernandez out of 2009 Topps. 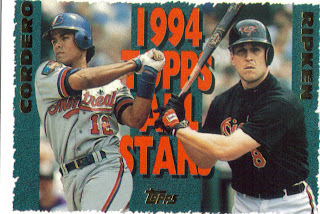 Here is a 1995 Topps card showing the 1994 All Star shortstops, Cal Ripken and... Wil Cordero?  Where was Ozzie Smith?  I would have never guessed Cordero as starting shortstop on any All Star team, but 1994 was the year in which the Expos were very good and just might have won a World Series, had that pesky work stoppage not happened.... 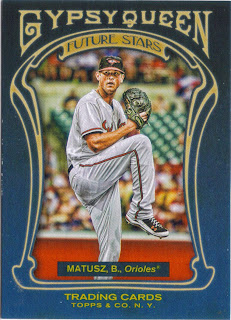 Among all the Orioles stuff was this awesomely blue Gypsy Queen of Brian Matusz.  I think the card scans very well and looks pretty sharp.  I sure hope Matusz has a bounce back year for the Orioles next year.  We'll see.

So, thanks for the trade, Jason.  I'll be sure to put more Cubs and Mets aside for you in the future so we can do this again.

That being said, I don't think I trade enough.  If anyone out there wants to try a trade, let me know.  Shoot me an email of the team(s) you like and I'll send you something in exchange for some Orioles or other players that I like.  I definitely need to get more mail in my mailbox.
Posted by William Regenthal at 3:43 PM

Hey, glad you liked the cards!