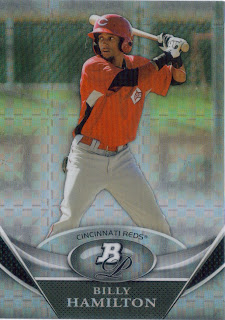 In my final bit from my trip to the card shop last week, Babe and I picked up some Bowman Platinum.  She pulled this really nice Billy Hamilton Superfractor (?).  I think the card looks really cool and it scanned pretty nice as well.

Also, in some personal news, I passed the second half of the ASBOG Exam (Geology licensing exam).  This means that I am now a licensed geologist.  This is a big deal, it is like the Bar exam, but for geologists.  I have been studying to pass this thing since I took my job in 2007.  I took the first half three times (passing it on the third try in May 2010) and took the second half three times.  Third time seems to be a charm.
Posted by William Regenthal at 8:45 PM

Congrats on passing. I'm sure you are relieved!