More on the Trade With Schuyler

So, I discussed my trade with Schuyler here.  Here are a few of the other highlights from the deal. 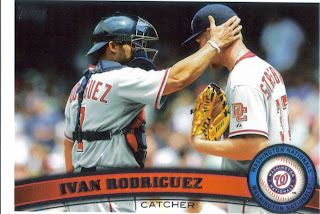 He threw in a few 2011 Topps cards.  One of which is this Ivan Rodriguez.  He is seen here talking to Stephen Strasburg.  It seems that Topps likes the relationship between Pudge and Strasburg, as they have shown the duo on several cards, now. 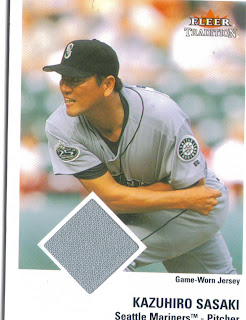 Another cool card is this Kaz Sasaki relic out of Fleer Tradition.  Sasaki was a really good player in MLB, albeit, for a very short time.  He was Seattle's Ichiro, before there was Ichiro.

I traded Schuyler some shiny cards as well as a partial 1987 Topps set (complete with a Bonds RC) for the Bechler auto and these cards (as well as several others which aren't pictured).

Schuyler is a really cool dude and you should check out his blog if you haven't already.  make sure to click 'follow' so he knows people are interested in what he has to say.  I look forward to doing a lot more trades with him in the future.

Posted by William Regenthal at 7:48 PM