I realize it has been a while since I posted something other than a 1955 Topps card. I have been moving and unpacking at the house, so I haven't had very good access to my cards yet. The room I plan on turning into a man cave has been the staging area for the boxes that will be unpacked and contents of said boxes will be spread throughout the house.

Anyway, I did get to the two boxes full of autographed baseballs. They have been removed from the boxes and placed inside my awesome china cabinet that I bought at a 'garage sale' that was being done through my company's corporate office in Charlotte. I got the china cabinet for a CHEAP $200 because it was so cumbersome to move, the people selling it didn't want to take it back and accepted my offer. Woo hoo. Anyway, that isn't what you came to read about today: 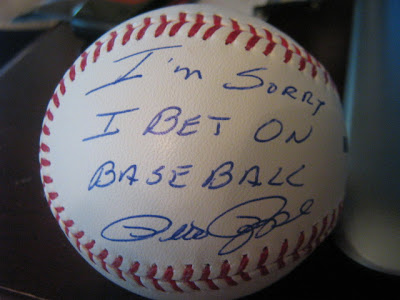 This is by far one of the coolest autographed baseballs that I own. I saw it on his official webpage (along with t-shirts that say the same thing) and got a good chuckle out of it. I doubt Rose is truly sorry, as the ball suggests. My good friend P.A. put it in perspective for me several months ago: Pete Rose makes a lot of money sitting across the street from the Hall of Fame every year. The controversy surrounding Rose sells and if he were one day inducted into the Hall of Fame, the novelty of all of this would soon wear off. I agree with P.A.'s point. Rose could just sell baseballs with his autograph on them, but one that says "I'm sorry I bet on baseball" is truly unique among the other baseballs that I own, especially ones with inscriptions. I have no doubt that Rose will one day be in the Hall of Fame, but I believe it will come after he has passed away; just my theory. 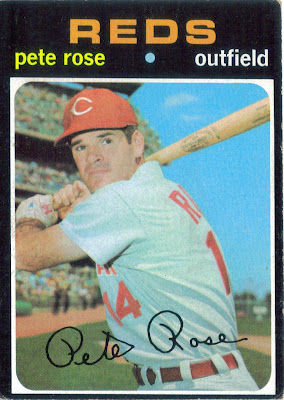 Clearly, Rose the player should in in the Hall of Fame, if not Rose the person. His numbers definitely warrant inclusion. That is why I believe he will be in there one day, but, again, it may happen after he is gone. I also believe that Rose knew what he was doing when he signed the agreement with Bart Giamatti banning him from baseball for life. However, the Hall of Fame isn't an affiliation of MLB. They are their own separate entity, but one can understand why they have kept their doors shut to players like Rose, Joe Jackson and Eddie Cicotte, among others.
Posted by William Regenthal at 2:53 PM

That is one sweet looking baseball, even if I can almost read right through what he's saying haha. Nice ball man

Yep, that auto is really funny and unique.