I'm back with another Blog on Location. This time, we are in Atlanta for Wrestlemania 27. We paid for the 8AM - 12PM session of Wrestlemania Axxess. I couldn't get tickets for the VIP session because they had sold out, but we got general admission and still were able to meet a bunch of people. 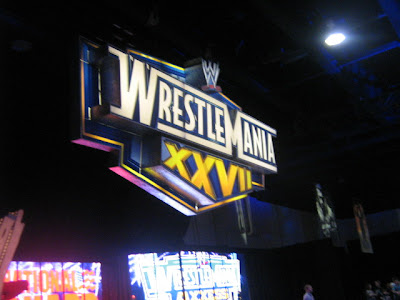 Our first superstar signing was Great Khali and JTG. I had completely forgotten that JTG was still on the WWE roster (sorry man), but we were excited to meet Khali, who is considered an icon in India. His hands were freaking huge. 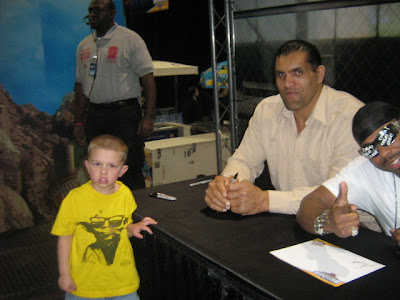 Vickie Guerrero immediate took to Chris when he walked up. She loved his smile and commented on how cute he was. I didn't know what to think of meeting her because she plays such a good 'heel' persona, but you could tell she was having a blast. She was very friendly, engaging, and we had a nice time talking with her. I gained a whole new respect for her, almost immediately. 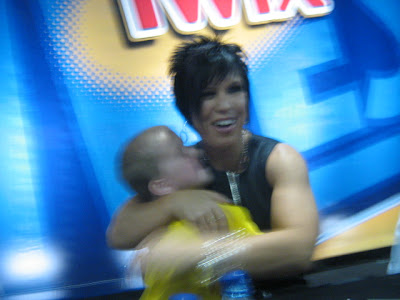 LayCool (Michelle McCool and Layla) are probably my least favorite group right now in wrestling. However, when they saw Chris, they both fell in love with him too. They signed autographs for him and grabbed him to take a picture. They were really nice, also. I'm still going to boo them tomorrow, but I know that in person, they are nice people. 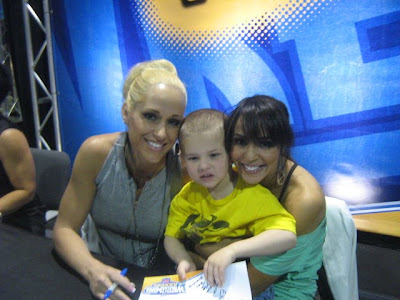 I've watched Kane on TV since 1998, so it was pretty cool to meet and speak with him. He said he was really tired from a long night before, so that's why he looks less than thrilled to be posing for pictures. Even though, Kane smiling would definitely be out of character for him. 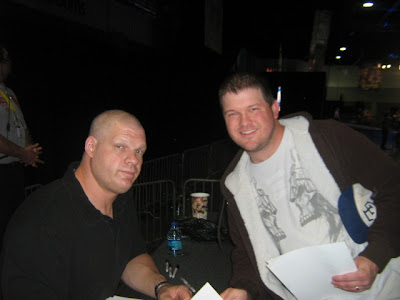 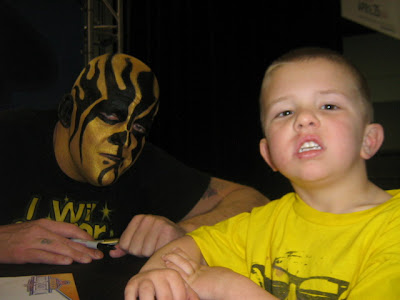 Goldust also posed with me, which was cool. It was awesome to meet the 'Son of The Dream' (Dusty Rhodes is his dad). 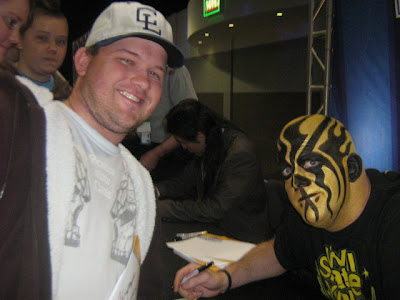 My wife freaked out when she saw that we could meet William Regal. He has been her favorite since she started watching with me around 2000. She actually teared up a little cause she was so excited. I was happy to meet him too. I talked to him for a bit about how long I've been watching him, since 1998 when he was 'the Man's man - Steven Regal.' He told me that that was six weeks of his life that he wished he could have back. 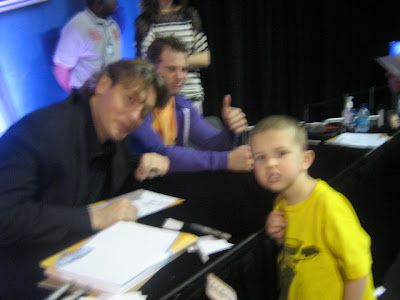 We are hanging out in the hotel room now, and will go down to the lobby tonight for the WWE Hall of Fame ceremony. Hopefully we will bump into some more wrestlers tonight.
Posted by William Regenthal at 3:04 PM

Sounds like you had a nice time so far man!! Awesome!

Glad you are having a good time and spending time with your family. Love ya!

Next year its down here and i'm going to be all over it!!

Please tell me your son approached Vickie with "Excuse me, can I have your autograph?"

Chris actually did say Excuse Me! She just ate him up, she even said that his smile made her day. She was really nice and personable. She said that she always has a good time going out there. She also told my wife that after all the years she spent watching Eddie do it, she felt like she had to carry it on for him, which I think is a great thing for everyone.

So jealous, I'm glad ya'll are having such an awesome experience. Hope you get to meet more guys while your there, and I want lots of pics of Wrestlemania!!!

Wow! I was there that Saturday morning for Axxess. I only took pics with the stars(all Divas that morning) with Melina, Tamina, the Bella Twins, and Alicia that day before going to the HOF that night. I actually went to four Axxess session.

Yes, you can tell how much Laycool loved getting a pic with Chris.

All the people I met there treated us like stars. I'll definitely being going to another WrestleMania!