One of the things that keeps me going to the shop week after week, braving the 3 and 1/2 hour drive is the possibility that someone will bring in a collection to unload. I have been lucky a couple times; getting some sweet cards really cheap, but more often than not, I end up having to thumb through some 1991 Donruss and 1988 Topps.

This past weekend, a young guy brought his album in, and for the most part, it was 1993 Topps and 1992 Topps Gold. Stuff we thought was 'gold' (pun intended) back then. He did, however, have a couple things I liked, so I bought some cards off of him for $5.00. 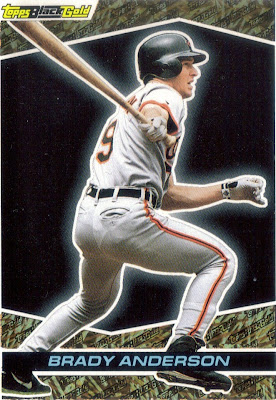 First up, I was able to snag this 1993 Topps Black Gold Brady Anderson. Not too common a card, for sure. I hate that I broke the guy's set (well it wasn't a complete set, he just had the 5-10 cards that he received in the mail. That set came in series.) but it is cool to have a Brady that isn't all that common. 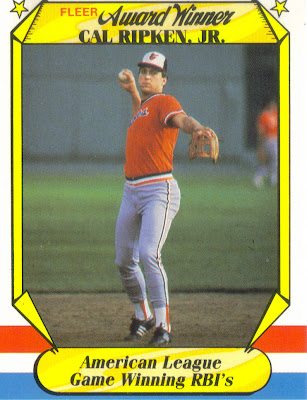 Holy Turd Burgulars Batman, a Cal Ripken I didn't have! I'm amazed. Anyway, never a bad day when I add to the 400+ different Cal Ripkens that I have. Not bad, if I do say so myself. 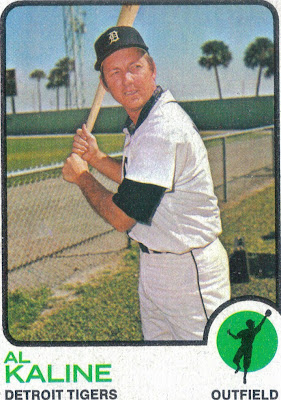 Finally, one of the few 'vintage' cards the guy had, a 1973 Topps Al Kaline. Also a very nice card. The 73 set is underrated, the front design was basic, but decent looking. The back took away from this set because the black border would rub off easily, thus making it hard to get a 'mint' set (if that's what you're into). Also, some of the photography in this set is God awful, but you do get a sweet Mike Schmidt RC...