My younger brother Andy is not a baseball card collector. I've been trying to work on him for the past five years, trying to get him interested in them in hope that I would have someone else to talk about cards with. He has been coming to the card shop with me (pretty much weekly) over the past five years. I had complained that there wasn't much to open at the shop this week except for 2010 Tribute, which I surely couldn't afford. He chimed in that he could afford it because he had been earning money by cleaning out horse stables for my parents. I went online and showed him some of the things he could get from 2010 Tribute (Strasburg auto being the huge hit), but made sure not to put any kind of pressure on him (He's my brother, I'm not going to make him buy anything at the shop unless he wants to). He decided that he would go for it. 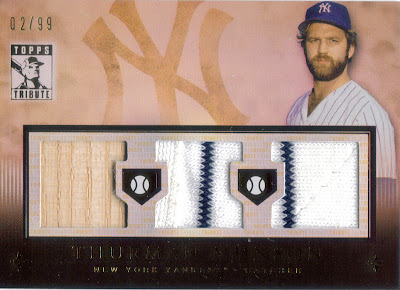 (I also decided to pick up a pack) I pulled this Thurman Munson triple relic. Andy picked this pack for me, he is always good at picking packs. Pretty sweet card. 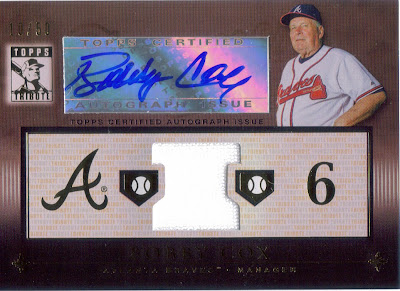 One of the highlights of his box was pulling this Bobby Cox Auto/Relic. I had never seen any Cox autos, so this one was pretty cool. I know a bunch of Braves fans who definitely would sweat over this card. Andy was a bit underwhelmed, but I assured him that he got a good pull with this one. 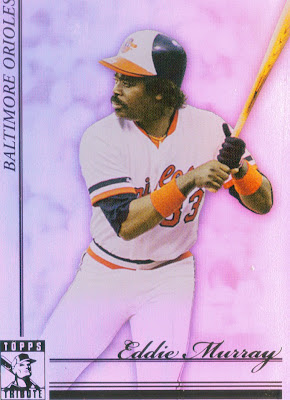 I went ahead and gave Andy a dollar for this one, since it was a Murray. I had hoped that he would have pulled a Brooks, but Murray was the only Oriole that Andy pulled. 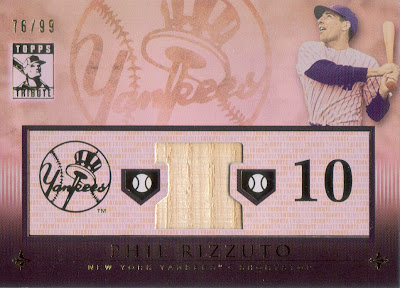 He pulled this sweet Phil Rizzuto bat. Once again he was a bit underwhelmed, and I, again, assured him that pulling a Rizzuto bat was a good hit. The box was very Yankee heavy, and I think he understood that he could maybe ebay most of the Yankee stuff and recoup some of the money he spent. He was starting to feel some buyer's remorse, for sure. I felt bad, but we kept on opening the packs, hoping for that blue Strasburg redemption card. 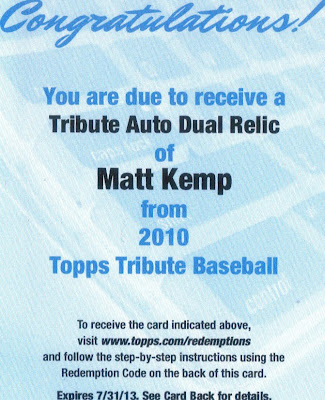 Redemption card? Strasburg? Nahhh. Just a Matt Kemp Auto Dual Relic. He was once again let down, but even he knew that this one would definitely be claimed, and quickly. His period of letdown on this card didn't last long once he realized how quickly he could sell this to get some money back. Of course, I'm going to help him out by listing some of the hits on Ebay, making trades, etc.
.
I kind of feel a little bad, since he is 14 and dropped so much on the box, but he's a smart kid and definitely has busted enough boxes with me to know that when you set your heart on getting one card, you most likely will be let down. Shooting for the Strasburg was pretty bold, but in the end, I'm glad he had the balls to at least give it a shot. He also got some really good pulls (the Cox and Kemp for sure) and we had a good time opening the box.
Posted by William Regenthal at 11:26 AM