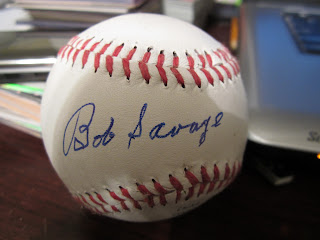 Savage, a pitcher, had a career record of 16-27 with a 4.32 ERA and 171 strikeouts.  He played alongside Eric McNair on the 1942 Philadelphia A's for a brief period of time.  As you may know, McNair is a constant subject on this blog and his family reads it from time to time.  One of my TTM goals lately has been to try to get some correspondence from some of McNair's former teammates.  Unfortunately, Savage did not reply to the letter I had written asking about his possible interactions with McNair, but it was worth a shot. 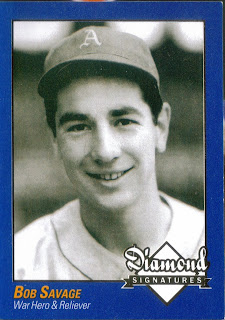 Savage did include this Diamond Signatures card along with my baseball.  It is a really sharp looking card that I will add to my PC.  I mailed to Mr. Savage on November 13 and got my baseball back signed today (November 19), so that makes him a 6-day TAT.

Posted by William Regenthal at 6:34 PM