I got my 67th TTM success today from former Negro Leaguer Herb 'Briefcase' Simpson.  Simpson (b. 1920) played professionally in the 1940s and 1950s.  He got his nickname of 'Briefcase' when he was playing alongside Harry 'Suitcase' Simpson.  Since they both had the same last name, and Herb Simpson was shorter, he becane 'Briefcase.' 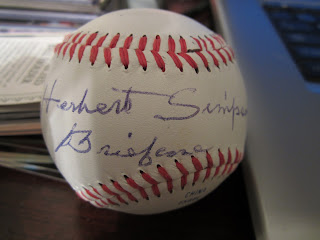 Along with my baseball, I sent a note to Mr. Simpson asking him the following questions:

Who was the greatest hitter you ever saw? Cool Papa Bell

Who was the greatest pitcher you ever saw? Satchel Paige

What one thing do you treasure most from your playing days? Playing against Mr. Paige, Josh Gibson, Bell, Doby, Mays.

I always like to see who players admired when they were playing, so this was really interesting to read.
Posted by William Regenthal at 11:51 PM