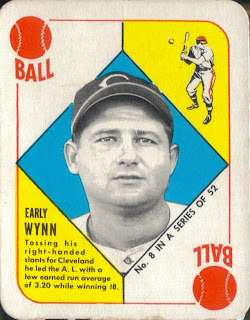 I hope everyone has had a great Thanksgiving.  I am full from turkey and German potato salad.  YUM!  I fulfilled my goal of not going out of the house today into all of the craziness that is Black Friday.  I have sold a few cards today during my Black Friday promotion (special thanks to GCRL for picking up some stuff from me).  I have a promotion going all weekend, through Cyber Monday, so keep checking my COMC for deals and help me clear that stuff out.

Now onto our regularly scheduled blog for the day:

Here is card #8, Early Wynn.  I posted about Wynn recently when I picked up his signed baseball.  You can read about that here.