I finally got another TTM success after taking some time off from it recently.  I haven't sent any off in a good while, mainly because I have run out of ideas as to who I should send to. One of the last ones I sent off was to Eddie Robinson and I finally got my ball back yesterday. 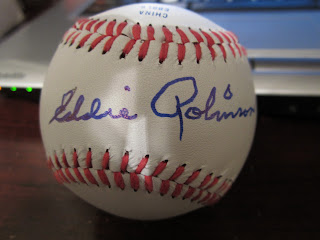 I mailed to Robinson (b. 1920) on May 31, 2012 and got my ball back on November 4, 2012.  One of the reasons for the delay was that I failed to send any money with my ball.  About a month ago, I got a letter from Robinson asking for a donation of $10 for the signature and an ad for his book.  I sent two separate checks, one for the book and one for the autograph and got the signed ball back yesterday. 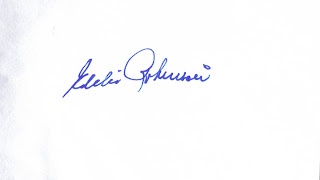 But wait!  That's not all!  In addition to the baseball, he also sent a signed index card and two signed baseball cards!  Awesome! 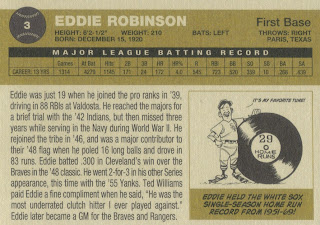 Robinson played in the majors from 1942, 1946-1957 for the Indians, Senators, White Sox, A's (two separate stints, one with the Philadelphia A's and later with the Kansas City A's), Tigers and Orioles.  He had 1,146 career hits, 172 home runs and an average of .268.  He was a key member of the 1948 World Champion Indians.  Funny, I have gotten two signed baseballs from players who were on that team just a few days apart from one another.  Eddie Robinson and Al Rosen are the only surviving members of the 1948 Indians. 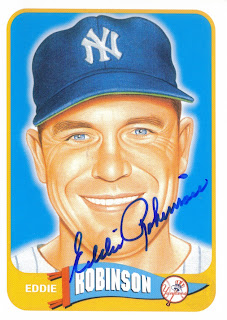 Robinson is my 65th TTM success.  I need some assistance in figuring out my next batch of TTMs.  I want to stick with my theme of old players because I enjoy looking into the past of the game and learning about these guys.  Current players are nice and all, but I would much rather correspond with these guys.
Posted by William Regenthal at 2:20 PM