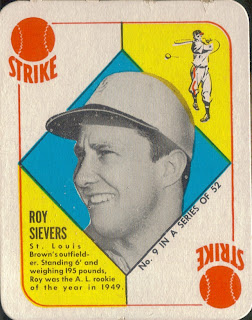 Sievers would finish as high as 3rd in the AL MVP Award voting (1957, when he hit a career high 42 home runs) and was a 4-time All Star.  He was a member of the St. Louis Browns during their final year of existence (1953), but was traded to the Washington Senators for Gil Coan before he could me a member of the Baltimore Orioles.

Sievers signed a baseball for me TTM a while back, you can read about it here.
Posted by William Regenthal at 9:32 PM