Time to Give Something Back

I never sign online petitions.  I just never believed that they were worth the effort.  I mean, really?  There are 7 online petitions for states to secede from the Union?  Really people?  Jeez.  Anyway, I didn't sign an online petition (that I can remember) until I saw one posted on another blog.  This petition is directed toward generating publicity on trying to get a friend of the hobby and this blog in particular another look at the Hall of Fame.

I know, we can't let every player into the Hall for sentimental reasons, but hear me out.  Virgil Trucks was one of the most dominant pitchers of his era.  He missed 2 seasons in his prime when he enlisted in the Navy for World War II.  He is one of only three pitchers to throw two no hitters in one season.  Also, he played on some very poor teams.  Had he been on the Dodgers or Yankees for the bulk of his career, no doubt would he have the magic numbers to make the Hall of Fame. 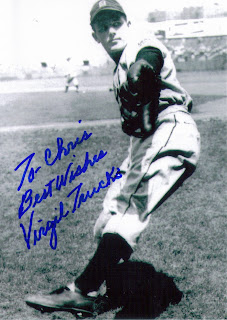 Mr. Trucks has given to his fans for the entirety of his baseball life.  I believe it is time for his fans to give back to him.  Take a second and sign the online petition.  What could it hurt?  Let's at least show him that he is in OUR Hall of Fame.

Also, please take a look at this great blog and their update(s) on Mr. Trucks' health:  http://baseballbytheletters.blogspot.com/  I know Mr. Trucks would appreciate any kind words during his health crisis.  He has retired from signing through the mail, so don't request an autograph.  Just send him a note wishing him well or thanking him for everything he has done.  He is a really good man whom I admire, so please, let's all show him our support!

Thanks guys!
Posted by William Regenthal at 11:54 AM

Just signed it. I never got his autograph, but I know a lot of people who have and they always say great things about the man. I hope he gets into the Hall.