My Thoughts on 2012 Panini Cooperstown

I went to the LCS today after a bit of a layoff and grabbed a few packs to see what some of the new stuff looks like.  One thing I noticed was a box of 2012 Panini Cooperstown, so I figured, what the heck, I'll pick up a few packs and see what it is about. 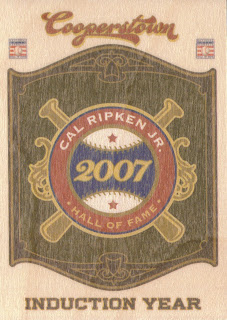 I'm pretty much exclusively a Topps guy, especially since my decree earlier this year that I would no longer give any of my hard earned money to Upper Deck after some shady customer service encounters.  I have never had any issues with Panini, however, so I thought I'd give them a shot and I actually wasn't disappointed.  Albeit, they can't use MLB logos, the cards themselves look pretty nice.  I got the above Cal Ripken Induction Year card out of one of the packs.  It doesn't show Cal anywhere on the card, but it is still pretty cool.  It has a wood feel to it, which is nice.  I don't know how hard it is to get the card, but I was happy with it nonetheless. 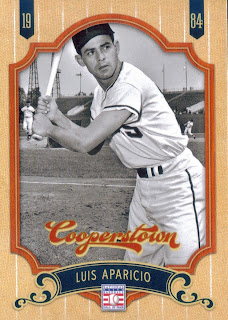 This Luis Aparicio is a look at the base design for the set.  Pretty sharp looking card.  Again, you see no MLB logos, but I don't think it detracts from the card at all.  Just my opinion, though.  The proprietor of the card shop told me that he has seen a few HOF autos pulled, notably, Eckersley and Kaline.  I don't know if they have any cut signatures or anything like that, though.

In all, I think I definitely will be looking to grab a few more packs of this if they remain at the card shop the next time I go in there.  I suggest you also give them a try if you come across them at your LCS.
Posted by William Regenthal at 8:35 PM

I need to find a place to get these !

You sold me on this product. It seems like it is worth checking out.