It has been quite a while since I have been able to add Hall of Fame signed baseballs to my collection.  I have been really busy with work and have been knocking out cards from my want list.  However, I checked out an ad on the side of my Facebook (most of which are scams, but this one turned out to be legit) for an online estate auction and I was not disappointed.  I ended up spending approximately $120 on two signed baseballs, a signed 8x10 for my son's birthday and a vintage pennant. 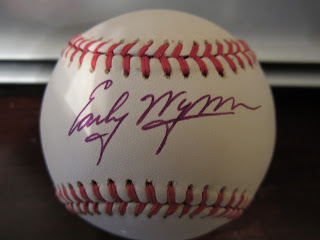 I'm really happy to add the Wynn ball to my collection.  He has a really awesome signature.  The ball is a Bobby Brown OAL baseball and still has the original box.  Wynn's signature on a ball usually goes for around $115 to $120, but I was able to get this one from the estate auction for $45.  Very awesome!  Stay tuned for the next signed ball that I got from the auction.
Posted by William Regenthal at 5:59 PM

Sharp autograph dude, congrats on the steal! Look forward to seeing the rest!