Here is the second baseball I got from that online estate sale that I spoke about yesterday.  My 78th Hall of Famer, Lou Boudreau. 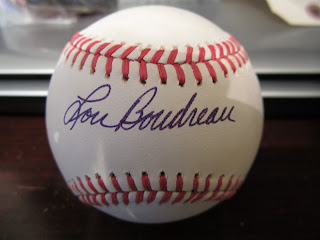 Boudreau has one of the crispest signatures for any Hall of Famer, in my opinion.  This signature is on a Bobby Brown OAL ball.

Boudreau (b. 1917 - d. 2001) played in the majors from 1938 to 1952 for the Indians and Red Sox.  He was the 1944 AL batting champion and 1948 AL MVP.  He led the league in doubles three times (each of those seasons hitting 45 doubles).  He won the World Series with the Indians in 1948.  He finished his career with 1,779 hits, 68 home runs and a .295 batting average and was elected to the Hall of Fame in 1970 (his 10th ballot) with 77.3% of the vote.  At first glance, Boudreau doesn't appear to have the numbers to back up a Hall of Fame election, but as a shortstop, he was comparable to other shortstops who are in the Hall, namely, Travis Jackson and Phil Rizzuto.  Boudreau's numbers actually are strikingly similar to those of Jackson.

Now, I am about to make you all sick.  Baseballs signed by Boudreau usually go for $75-$80.  I got this one for $21.  Not bad, if you ask me.  I'm definitely going to be on the lookout for more estate auctions, that's for sure.
Posted by William Regenthal at 4:56 PM

$21 for a beautiful autograph like that? I'd do that any day dude! Congrats on another nice add!

Beautiful! I grew up listening to Lou and Vince Lloyd broadcasting Cubs games on WGN radio. "It's a beautiful day for a ball game, for a ball game today..."