So, we got a pretty sweet tax return this year. My wife and I cut a deal that we would take the odd amount of the return and split it between the two of us and put the majority of the return on our credit cards. We paid off one card, and were able to knock the other one down. Once we pay off the last card, we will be able to save for a down payment on another house and get out of this cramped ass apartment.

We took different paths with our 'allowance', my wife putting some of it in her savings account, and using the rest on clothes, etc. I took mine and got some stuff for my collection and a few other things. I figured that with as rough as this past year has been on me, I deserved a treat, so I kinda went nuts on Ebay. Here is the first of my pickups:

1941 Playball Jimmie Foxx. Double X, one of the most feared hitters of his era. By the time he retired, Foxx was #2 on the all-time home run list (behind Babe Ruth, of course) and held that position until he was passed by Willie Mays. 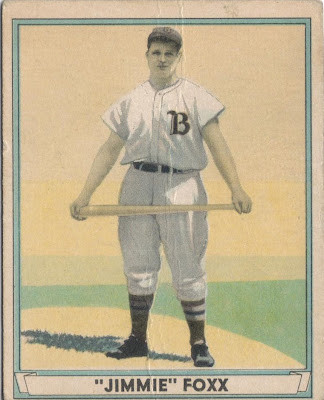 I had not heard of Playball cards until I began looking to see just what vintage cards I was interested enough in putting bids out on. I think the design is very nice, and I'm surprised that we have not seen any 're-issues' lately with the vintage craze going on. 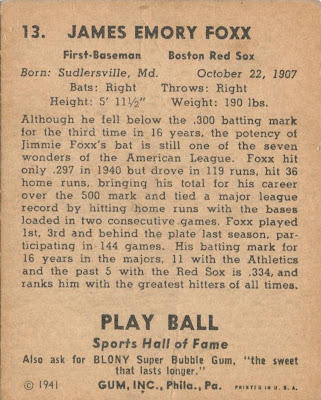 Even the back is nice. I like how it has so much information. It looks similar to the back of a Bowman card from later on in that decade. I really like these cards, and if I come into more money, I may try to get a couple more. What do you guys think?
Posted by William Regenthal at 6:36 PM

NICE pick up. The Foxx card is an absolute classic. I've bid on that one a few times in the past and was way outbid. Guess you did get a nice tax return!

UD did a Play Ball reissue a few years back, but I think it was one year only and they went with a different year, 1943 I think. I think it was UD Origins (but I might be wrong) At any rate I have a CC auto done like a Play Ball card, and it's one of my faves.