I was in Raleigh today for my third attempt at passing the NC Board of Licensing Geologists 'Fundamentals of Geology' Exam. Actually, I was in Raleigh last night, studying until 12:30AM, but that's beside the point. 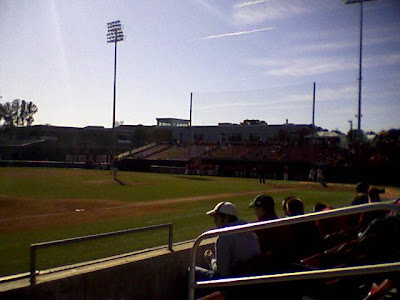 One of the benefits of the exam taking place in Raleigh was that this is of course where Max goes to school. We were able to meet up the night before the exam, and the afternoon after.


Having my brain fried by such a tough exam, I thought it would be a good idea to chill out, get a bite to eat and catch a ball game. Definitely a good choice.


NCSU was playing Quinnipiac and took them to school! 17-6. Ouch. We had a good time, as always. The interesting point here is: with all we have talked about concerning baseball, and as much as the two of us love it, this was the first game we caught together! I know for a fact that there will be lots more (2010 World Series, Baltimore Orioles vs LA Dodgers, WHOS WITH ME?), but it was interesting that with our crappy schedules, this was the first time we have been able to get together at a ballpark.


Well, I had an awesome time, Max will attest to that. I'm excited for the mext game we can catch.
Posted by William Regenthal at 10:58 PM

You're a geologist?? Me too! Sort of.

You could say that I am. I have a B.S. in geology from UNCC. I work for an environmental consulting company and am going for my P.G.

Very cool. I'll be starting a master program at U-Buffalo in August. I got the BS from tiny Oneonta State last May. Hopefully I'll take "the test" sometime while at Buffalo. Maybe you can send me some tips!