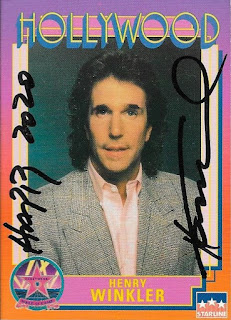 I decided to try my hand at some non-baseball TTMs recently, and I had seen that Henry Winkler signed TTM.  I found this card on COMC, so I picked it up, and sent it out back in November.  This was actually the first TTM that I got back after New Year's, so his Happy 2020 inscription is really cool.

Winkler (b. 1945) has appeared in such films as: The Waterboy, Scream, Click, Holes, and several others.  He is probably most known for his role as Arthur Fonzarelli on the TV show Happy Days.  I rather enjoyed his work as the Bluth Family's attorney, Barry Zuckercorn on Arrested Development.

I mailed to Winkler on November 4 and got the card back on January 2, for a 59-day TAT.
Posted by William Regenthal at 6:02 PM