I went to the LCS the other day, mainly because we were bored, and picked up another few packs of Bowman Platinum.  The proprietor of the shop was sold out of Topps Chrome, but did allow me to look through his singles for some Orioles. 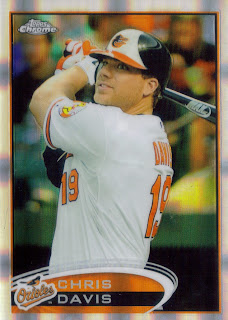 He hooked me up with the Chris Davis X-Fractor.  They scan kind of funny.  Definitely doesn't do the X-Fractor design justice, but it still looks kind of cool. 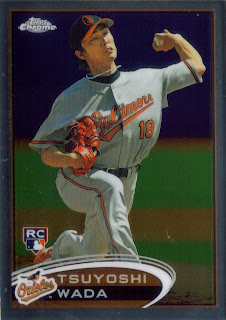 I got this Tsuyoshi Wada RC, which I needed for my Orioles PC.  I have two guys sending me a ton of Chrome singles in separate trades, so I should have this set taken care of, but I wanted a few singles that I could slide into top loaders and put in my player collections.  Wada hasn't thrown a pitch for the Orioles in the regular season.  He went down with an elbow injury in spring training.  Supposedly, he was the better of the two Japanese signings this off season, with Wei-Yin Chen being the second best.  Well, if Chen is second to Wada, I definitely want to see what Wada can do.  I hope he is 100% next season, because Chen has been amazing. 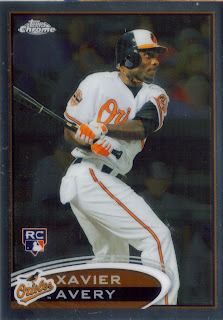 Finally, I picked up this Xavier Avery RC.  I have watched Avery since he played for Single A Frederick.  He is a good ball player who should be a regular major leaguer for years to come.  He got some itme in the majors this season, starting off with a bang.  The league caught up with him and he was sent down after appearing overmatched.  He is now back with the team as a September call up, so he should see some playing time as the Orioles continue to put some late season pressure on the Yankees and Rays.
Posted by William Regenthal at 7:28 PM