A TTMer Has Passed Away 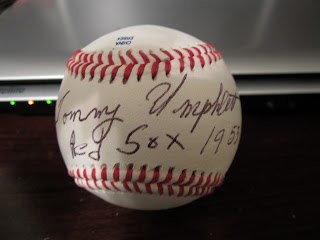 I discovered that Mr. Umphlett was from a small NC town that I visit frequently, as I do a lot of my environmental consulting work there (that is where two of our clients have their home offices).  I thought it was cool to send a ball off to a former player that I had the possibility of bumping into at a gas station or Wal Mart, etc.

I don't know the cause of death, but at 81, it probably could have been a multitude of things.  It is sad, however, no matter the cause.  I never knew the guy, but I appreciated his generosity when it came to taking the time to sign my ball.  I will say a prayer for his family and be thankful I had this small interaction.

I haven't really thought about it until now, but given the age demographic of the players I have been sending to, and the 64 TTM successes I have received, only two have passed away so far.  It is inevitable, for sure, but I don't like to think about it.  I'm not one of those guys who likes to dwell on that type of thing nor do I entertain the thought of selling my ball, just because the player had died in hopes of cashing in.  I intend to keep my baseballs as long as I am around and probably will pass them on to my son later on.