I wasn't going to blog tonight.  I got home really late from being out in the field today, but after taking a shower and sitting for a bit, I decided to go ahead and post tonight.  So, here are some more 1969 Topps I got from Sportlots the other day. 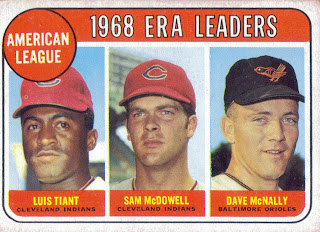 I like these ERA and RBI leaders cards because most  years you end up with some oddball guys who aren't your typical league leaders.  I like that the above ERA leaders card has an Oriole, Dave McNally.  McNally was a really good pitcher for the O's for several years and at times is overshadowed by Jim Palmer and Mike Cuellar in that era. 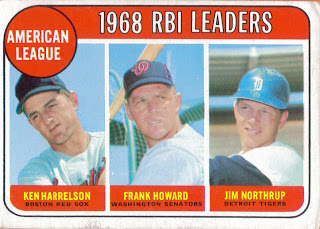 Check out the guys who led the AL in RBIs during the 1968 season.  Frank Howard is the only one that I had heard of off the top of my head.  The others I'm going to have to take a minute to look up.  Not tonight, though.  I'm too tired.
Posted by William Regenthal at 10:16 PM