I know I'm not the only one that feels this way, but Topps' 2012 redemption/giveaway promotion is pretty lame.  I loved the ones from the last 2 years where you got actual cards for your codes.  Yeah, some of them (ok, most of them) were late 70s to 80s commons, but the thought that you could get a 50s card from your redemption code made it a lot of fun.  This year, I redeemed 60+ codes and got a multitude of 'virtual' coins (woo hoo!) and one, count it, one card.  One card out of 60+ codes.  Uggh, lame.  Well, I had just about given up on the whole thing a couple months ago and took a chance that someone would fall for a trade of the card I got (Golden Die Cut David Ortiz) for the Golden Die Cut Brooks Robinson. 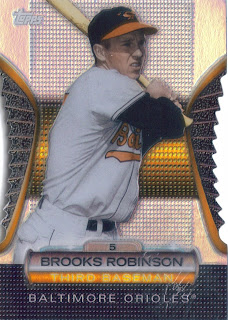 So, I was bored the other night and decided to log onto the Golden Giveaway website and redeem 7 codes that my brother John had asked me to redeem (yep, 7 more virtual coins).  I decided to click on my portfolio and check out my one card and was amazed to see that the Ortiz was replaced with the above Brooks Robinson.  SUCKERS!  I can't believe someone traded a David Ortiz card for this AWESOME Brooks Robinson.  Of course whomever got my Ortiz is probably thinking SUCKERS, I can't believe someone wanted that Oriole guy.

Trust me, I would much rather have Brooks than Papi, so I was really happy to pay the $2.92 to have this delivered to me.  The card looks good.  As you can tell, I haven't removed the protective film (nor will I).  I might look for a few more of the Orioles out of this set, because it does look good.  I imagine that the cards hold a bit of a premium, so the Cal Ripken will likely be really high.  Oh well, something to shoot for.

So, stay tuned guys for a look at some of the cards that Drew included in the birthday package he sent.  I'm off to eat some cookie cake and watch a movie for the rest of my birthday!
Posted by William Regenthal at 6:58 PM

Totally agree with you on the trade. And Happy Birthday!

I traded a silver Reggie for a silver Brooksie. I'd say you did better.