Well, that was easy.  I was able to complete the 2012 Topps Chrome set by making 2 trades.  One of the trades ended up being a tad redundant because the second trade was for a complete Chrome base set.  Now, I have a ton of Chrome singles, in order, missing quite a few in order to complete another set. 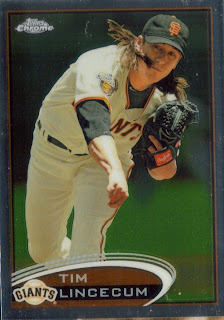 I got the completed set from fellow blogger Brad who is the proprietor of the blog: Brad's Blog.  All I had to do was send him some Phillies relics and autos and he hooked me up with the set.  Pretty easy transaction.  I got an email from Brad seconds after I had committed to a trade with a friend of mine from the old card shop named Zach for all of his commons.  So, now I have a ton of Chrome commons, haha.  Oh well.  I made two trades in a day when it has been forever since my last one, so I'll take it.  I wouldn't mind making more trades (wink wink nudge nudge), so hit me up.
Posted by William Regenthal at 6:16 PM

i am interested in trading for any dodger doubles you have.

email me if you have any of the five (?) dodger cards and we can work something out.

I picked up your seconds in a trade with Brad, he wasn't able to finish my set. Any chance you have extras of these to help me out:

Congrats on another completed set!