Drew has outdone himself this time.  I never expected my good buddy to surprise me with a present this year for my birthday (which is tomorrow), so when I came home to a box and saw what was inside, I was definitely excited.  Drew contributed my 76th Hall of Fame signed baseball to my collection. 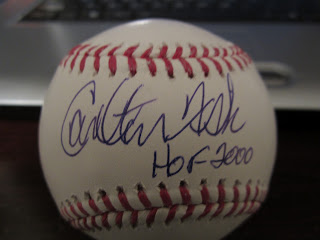 Fisk was elected to the Hall of Fame in 2000 (his second year of eligibility) when he was named on 79.6% of the ballot.

Thanks so much for the ball, Drew.  You've been an awesome friend and I can never put into words how much that means to me, so I will again say, thank you!
Posted by William Regenthal at 8:35 PM

Love me some balls... awesome Pudge!