For the first time in something like 10 years, a card show was held in Winston-Salem, NC. This is big because just a year ago, card shows were becoming scarce around NC. I had begun to worry that they would go the way of the dinosaur and not be held anymore. I am happy to see a good number of shows popping up around the area now (time to have one in Greenville, guys!!).

A small (very small) show was held this weekend in Hanes Mall. I practically grew up in Hanes Mall. My mom worked there part time almost 20 years ago, just to get out of the house. One of my brothers and one of my sisters also worked in the mall, too during their high school days.

The show only consisted of 5 tables, with mostly junk, but Pete, P.A., Andy and I were able to come away with a few notable things... 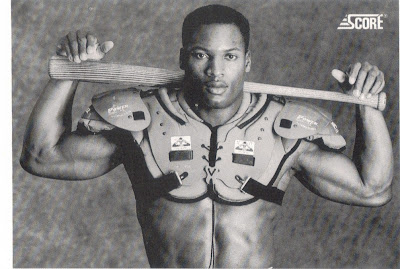 Once again with Bo Knows Your Mom. This shot of Bo Jackson in his football pads with a bat over his shoulders is an iconic image from the 90's collecting scene. A kid I grew up with had this as a poster on his wall. This is just a bad ass shot of a player who was freaking awesome, but didn't last as long as many would have liked.

99% of the cards from the late 80's - early 90's aren't worth crap, so you have to find little things you like about them for them to have any 'value' to you. I spent $1.00 on this card and am completely satisfied with my purchase. I had discussed this shot recently and was so glad to find this in the dollar box at this show.

Words could not describe Bo back in his heyday. The reverse of the card says all that needs to be said... BO. 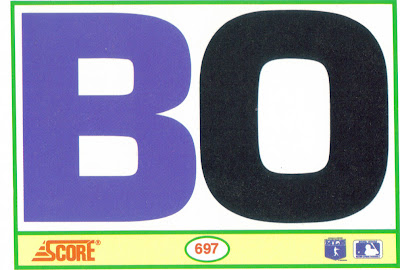 Posted by William Regenthal at 11:07 PM

lol... i grew up with this poster on my wall... right across from my michael jordan "wings" poster